I give your priesthood to you as a gift for service, but the outsider who comes near shall be put to death. (Num 18:7b)

Just as God gave the priesthood to Aaron and his sons, any opportunity to serve Him is a gift and a privilege bestowed by Him. It is not for man to decide whether he wants to serve the Lord. God has the absolute sovereignty to choose His servants. Therefore, if we are determined to serve God, we should seize the opportunity to cultivate ourselves spiritually and await His calling. If we steadfastly continue in spiritual cultivation and sanctification, God will reveal His purpose for us in His time.

Participating in church work requires time and effort. Many regard it as a sacrifice and a contribution of their talents. They may even claim that a certain task was completed because they had sacrificed much precious family time and contributed their talents. But is this really the case? The God whom we serve is almighty, lacking in nothing. He does not need man to complete His work. On the contrary, His providence surrounds us and it is we who are always in need of Him.

By the word of the LORD the heavens were made,
And all the host of them by the breath of His mouth.
He gathers the waters of the sea together as a heap;
He lays up the deep in storehouses.
Let all the earth fear the LORD;
Let all the inhabitants of the world stand in awe of Him.
For He spoke, and it was done;
He commanded, and it stood fast.

The Lord speaks, and it is done; He commands, and it stands fast. This is why He is worthy of our worship and our trust. His power is absolute and requires no human assistance (Isa 40:12–17). However, out of His love, He is willing to work with His loved ones, allowing them to participate in His salvation plan and to share in His glory.

A SMALL GESTURE OF THANKS

On the third occasion when Jesus appeared to His disciples after His resurrection, He performed a miracle by the (Jn 21:1–14). The disciples had fished the entire night without success. Then Jesus appeared and, on His advice, they caught 153 large fish. This miracle immediately strengthened their waning faith. Jesus’ crucifixion had left the disciples at a loss so they returned to their previous occupation of fishing. But seeing Jesus immediately brought to mind His promise to them at their initial calling: they would be fishers of men. And when they reached the shore, they saw fish being cooked over a fire, and bread. Jesus then said to them, "Bring some of the fish which you have just caught."

We rarely notice this detail but Jesus’ choice of pronoun was meaningful. The disciples had actually not caught anything. The fish in their boat were entirely the result of the Lord’s grace. Their professional skills and experience which they applied the whole night had netted them nothing. But Jesus regarded these fish as the fruit of their labor!

Without going out to sea to fish, Jesus already had fish and bread prepared for His loved ones. Yet He asked them to take the fish that they had caught to the fire. It was certainly not because He had not prepared enough nor because He could not have produced some more. Instead, He invited them to contribute because He delights in offerings that come from a sincere and thankful heart. It means much to Him to see a genuine willingness in His beloved people to present part of what He has given them back to Him (1 Chr 29:14). It may be the smallest gesture but to the God who loves us unconditionally, it touches Him to see that we love Him too.

A CLEAN VESSEL, READY FOR THE MASTER’S USE

Moses was learned in all the wisdom of the Egyptians and mighty in words and deeds (Acts 7:22). Motivated and talented, he decided—at the age of forty—to do something for his people. He presumed that his brethren would understand that God would deliver them by his hand (Acts 7:25).

What possessed Moses to make such a bold assumption?

Moses was young and powerful, possessing great talents and holding a position as Egyptian prince. He thought that he had been given all these to deliver his people. But God’s time had not yet come. Besides, God did not need to tap on Moses’ talents or connections to save His people. Delivering the people from slavery could not be accomplished by might or by power but only by the Spirit of God.

Hence, God waited another forty years before He called His servant. By that time, Moses had neither eloquence nor self-confidence. In human eyes, Moses was a “has-been.” But in God’s eyes, this was the right time for God’s call and commission—when Moses can take no credit for the deliverance of . From that moment, Moses would go on to become a great spiritual leader, a servant of God and His people, denying himself in total obedience to the word of the true Leader of Israel.

The forty years Moses spent in the wilderness were vital to his complete submission to God’s leadership. It was God who paved this way for him. However, the earlier forty years that he had spent in the Egyptian palace were not without God’s purpose. It had been a time for Moses to acquire the knowledge of while learning about his true identity. Although being a part of —a people separate to God―had become more precious to him than the treasures in (Heb 11:26), Moses studied diligently and became mighty in words and deeds. Eventually, God made use of Moses’ knowledge and talents to pass down His ordinances and to compile the Pentateuch, leaving no excuse for man to claim ignorance of His will and His commandments.

Today, we do not have to hail from royalty—as Moses did—in order to be used by God. The Lord called not only priests and scribes, but also shepherds, farmers, tax collectors, fishermen, and others.

But in a great house there are not only vessels of gold and silver, but also of wood and clay, some for honor and some for dishonor. Therefore if anyone cleanses himself from the latter, he will be a vessel for honor, sanctified and useful for the Master, prepared for every good work.” (2 Tim 2:20–21)

We do not have to be a vessel of gold or silver to serve God. But we do need to be clean and sanctified to be ready for God’s use. The prophet Isaiah heard the voice of the Lord saying: "Whom shall I send, and who will go for Us?" and replied, "Here am I! Send me." But this was after the seraphim had touched his lips with a live coal from the altar and cleansed him (Isa 6:6–8). Isaiah knew it was important to serve but understood that being cleansed with the word of God was even more important.

Paul was called when he was still completely ignorant of the Lord Jesus. He was on the way to to persecute those who believed in Jesus, when a light from heaven suddenly shone on him. He fell to the ground and heard a voice saying, "Saul, Saul, why are you persecuting Me?"

Paul was caught unprepared. He loved God and thought He had been serving Him. Ironically, it turned out that he had been persecuting the Lord. A sudden blindness made Saul see this reality. In complete darkness for three days, he came to understand the purpose of his calling. Immediately afterwards, he began to preach Christ in the synagogues in , though without success. Worse, he had to flee for his life, leaving in a basket lowered from the city wall, since the Jews were watching the gates day and night, plotting to kill him.

When he eventually came to , he spoke boldly in the name of the Lord Jesus. He debated the Hellenists who responded by trying to kill him. Therefore, the brethren had to send him away to . It was only later when Barnabas took him to that the Holy Spirit sent both of them out to spread the gospel to the Gentiles.

Although Paul had the zeal to serve God even before he was called and had studied the Scriptures diligently (Gal 1:14), he did not possess true wisdom for salvation through faith in Christ (2 Tim 3:15). After his calling, he was truly sincere in his desire to serve the Lord Jesus. But before the Holy Spirit commissioned him, God wanted Paul to reflect on all the events in his life and to understand who the Messiah truly was, according to Moses and the prophets. Through all these, he became more humble and learned how to wait on God.

Was Paul’s exceeding zeal for the Jewish laws and traditions in his youth all in vain? Had he studied the Scriptures for nothing? No. His knowledge of Moses and the prophets came in very useful when he witnessed for Christ and expounded the truth of salvation. Well-equipped with the knowledge of the Jews when God called him, Paul went on to be an indispensable vessel in the house of God.

Analogously, we do not know when God will deem us ready for His use. But we know that we can only be called to serve if we persevere in learning the truth and transforming ourselves into a useful vessel. There are various vessels in the house of God, each with its unique function. Most importantly, a vessel has to be clean in the eyes of the Master and dedicated to its unique usage.

OUR GIFT TO GOD

When we come before God, we naturally want to present an offering to Him. But if everything comes from Him, what can we offer to show our gratitude and praise? We have only ourselves to present to Him. Therefore, Paul says, “I beseech you therefore, brethren, by the mercies of God, that you present your bodies a living sacrifice, holy, acceptable to God, which is your reasonable service” (Rom 12:1).

The examples of Moses and Paul remind us that the journey of faith begins with an encounter with the Lord and concludes with a living sacrifice. In between, we are to equip ourselves with the truth, identify God’s purpose for our lives, and watchfully wait for His calling.

Once God calls us to serve, it is for life. Serving Him is a life-long process that gradually transforms our lives. And this is the true gift from Him. Hence, we ought to offer ourselves as a living sacrifice—the true gift that we can present to God in return for all His goodness to us. 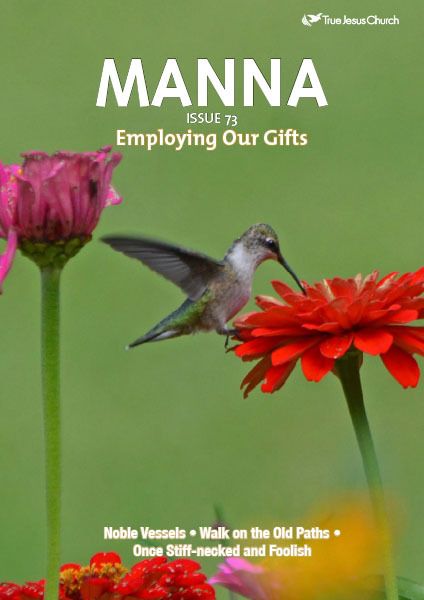