On the Front Line (II): Know the Enemy

To fight effectively on the front line, we must first understand our role. Part one of this series focused on establishing our identity as soldiers of Christ. In part two, we learn to understand our enemy.

IDENTITY OF THE ANCIENT FOE

It is human nature to treat someone who has deeply offended or hurt us as our mortal enemy. People may also have such extreme differences in opinions that they bear lifelong grudges. Such conflicts happen at workplaces, within families and even in the church. However, Paul urges us not to regard our brothers and sisters as our enemy. Our true and terrifying enemy is an invisible being who cannot be defeated with physical weapons and strategies.

Paul warned the Ephesians that believers wrestle not against mere flesh and blood but “against principalities, against powers, against the rulers of the darkness of this age, against spiritual hosts of wickedness in the heavenly places” (Eph 6:12). Our cruel and unrelenting enemy is Satan, the ruler of darkness in this age. We must never underestimate the intensity of the battle we have to wage with Satan. No matter how strong we are, we will not be able to withstand Satan’s might without the Spirit of God.

Apart from knowing the identity of the enemy, we must also understand his nature. This allows us to be better-prepared to battle him.

NATURE OF THE ANCIENT FOE

In Ezekiel’s lamentation (Ezek 28:12–15), the king of Tyre is an allegorical reference to Satan. Satan, or Lucifer, was described as the seal of perfection, full of wisdom and perfect in beauty. This is a stark contrast to the descriptions of other angels in the Bible; the archangel Michael and the angel Gabriel are defined less by their appearance and more by their duty.

In Lucifer, God had created a cherub who was perfect and beautiful. However, God gives free will to His creatures; i.e., God allows us to think and decide for ourselves. Lucifer became Satan when iniquity stemming from pride was found in him.

“How you are fallen from heaven,
O Lucifer, son of the morning!
How you are cut down to the ground,
You who weakened the nations!
For you have said in your heart:
‘I will ascend into heaven,
I will exalt my throne above the stars of God;
I will also sit on the mount of the congregation
On the farthest sides of the north;
I will ascend above the heights of the clouds,
I will be like the Most High.’ ”

Isaiah’s record reveals the thoughts and motivations of Satan. These were all centered upon himself, as can be seen from the number of times he said “I”. Satan’s thoughts also highlight his pride—the critical weakness that led to his literal downfall. He had the recklessness to think he could usurp the position of the Most High God. God then demonstrated His infinite superiority—He knew exactly what Satan was thinking. God took decisive and punitive action. As Jesus recounted: “I saw Satan fall like lightning from heaven” (Lk 10:18). Like a flash of lightning, Satan’s fall was very quick.

Satan’s plummet from Son of Morning to Father of Lies, from anointed cherub to the evil one, teaches us two things about pride. First, pride will bring us down very quickly. Second, pride works from within. Like an undetected hemorrhage, it may kill us before we even realize it! Hence, we must always be wary of pride, lest we fall as Satan did. Paul understood that status and position may turn men’s heads. Thus Paul advised Timothy that a bishop should “not [be] a novice, lest being puffed up with pride he fall into the same condemnation as the devil” (1 Tim 3:6).

History—both biblical and secular—is replete with examples of downfall caused by hubris. But why does pride persist in us? This is because man is often unable to detect his own flaws, especially pride (cf. Lk 6:42, 18:11–12). We are often complacent and numb to these warnings, thinking that they apply to other people. Nebuchadnezzar had been warned by God through Daniel not to think too highly of himself but still ended up suffering the consequences of pride (Dan 4). Hence, we must always examine ourselves and quickly root out the smallest weed of pride from the garden of our hearts. Our intelligence is a gift of God, and our knowledge is acquired through opportunities given by Him. These should not make us exalt ourselves above others. The more we know, the more alert we should be to pride in our hearts (1 Cor 8:1). The branch that bears more fruits should hang lower. We may claim to be abundant in fruit but if our branches are pointing upward, we are clearly bearing no fruits at all.

Elder John warns us that when Satan is released, he will use his full power to deceive (Rev 12:9). In addition, he will go out to the four corners of the earth to create his army, Gog and Magog, to wage war with the army of God (Rev 20:7–8). So as we approach the last day, we must be on the front line, ready to fight. When that day arrives, there will be no more time for us to prepare ourselves, and those who are unprepared will be deceived and lost.

What are some of Satan’s weapons of mass deception?

Jesus described Satan as the father of lies (Jn 8:44). Right at the beginning in the Garden of Eden, from the serpent’s conversation with Eve, we can see how brilliantly he could twist God’s word and instructions. Satan subtly suggests re-interpretations, and the potency of these lies in their apparent reasonableness and resemblance to God’s teachings. Satan’s lies will be so close to the teachings of God that it will be difficult to discern right from wrong, unless we have good spiritual eyesight.

For example, the Bible has very clear injunctions against homosexuality. Romans 1:26–32 talks about men who lust after other men, and women who lust after other women, leaving us with no doubt that homosexuality is wrong and is an act “deserving of death.” But Christians are increasingly persuaded to accept that a loving God loves everyone regardless of sexual orientation. The implicit suggestion is thus: whatever mankind does “in the name of love” will be tolerated by the Father. As homosexuality becomes socially and globally acceptable, we too may become more ambivalent towards it. We may not accept it but we do not unequivocally reject it. We ought not to be deceived into such “neutrality.”

In His love, God forgives sin. But a just and holy God does not declare sin to be righteousness. So while we continue to love people around us, we must boldly reject their deliberately sinful acts. If we are asked whether the practice of homosexuality should be allowed, good soldiers of Christ must be ready to step forward to the front line to say, “No.” Do not be deceived by Satan whispering, “Are you sure that God would not allow two people who truly loved each other to be together?” Our answer may hurt the listener or get us branded as narrow-minded and unloving but doing otherwise would jeopardize the salvation of both our listener and ourselves (Rom 1:32). Do not allow Satan to persuade us to risk salvation for the sake of feelings or human relationships.

Now the serpent was more cunning than any beast of the field which the LORD God had made. And he said to the woman, “Has God indeed said, ‘You shall not eat of every tree of the garden’?” (Gen 3:1)

Satan used the serpent to tempt Eve because the serpent was “more cunning than any beast of the field which the LORD God had made” (Gen 3:1). The serpent was a neutral party, but he allowed Satan to use him as a mouthpiece to deceive Adam and Eve. Likewise for us, we may accept all that is said to us with a neutral mind, but this may give Satan the opportunity to deceive us, turning us against our brothers and sisters in church and making us a child of Satan. Therefore, whenever we listen to a speaker on the pulpit, even if they were ordained ministers, we must discern if the message is according to the Bible. We must not simply accept any teachings concerning God without checking it against the Bible. The truth must act as a spiritual filter for everything we hear from anyone, otherwise we risk our own spiritual lives.

Satan fell on account of his pride. Hence he will seek to stir up our pride and cause us to fall.

Then the serpent said to the woman, “You will not surely die. For God knows that in the day you eat of it your eyes will be opened, and you will be like God, knowing good and evil.” So when the woman saw that the tree was good for food, that it was pleasant to the eyes, and a tree desirable to make one wise, she took of its fruit and ate. She also gave to her husband with her, and he ate.

This passage shows what drove the woman to eat the forbidden fruit from the tree of the knowledge of good and evil. The fruit was good for food and pleasant to the eyes but there were other trees in the Garden which surely had fruits pleasant to the sight and appealing to the palate. The unique selling proposition that Satan dangled and which persuaded Eve was that eating the fruit could make one wise; appealing to her vanity and pride.

We also see that Satan does not just restrict himself to the deployment of single weapons of deception. In the Garden of Eden, he had started off by subtly insinuating that there could be another meaning of God’s command—“has God indeed said?” (Gen 3:1b) He then blurs the boundaries between right and wrong—“you will not surely die” (Gen 3:4a). Eve was no match for the combined assault of Satan's weapons of re-interpreting the Bible and stirring of one’s pride. Like Satan, she desired to be like God. She ate the fruit and convinced Adam to do the same. They were driven out of the Garden of Eden. Sin and death entered the world. This familiar incident should be a constant reminder—the minute we feel pride in our hearts, it is imperative that we kill it, lest we sin and suffer the same condemnation as Satan.

As soldiers of Christ on the front line, we are under constant attack from our enemy. He will use every weapon in his arsenal to do this – deception, pride and temptation – and if we fall into his trap, he will seek to recruit us to his side. Therefore, we should be ever vigilant against Satan’s schemes. The Prince of Darkness is a master manipulator so we must safeguard both our hearts and minds. We protect our hearts by ridding our hearts of pride. We shield our minds by pursuing the mind of Christ (1 Cor 2:16) and holding fast to the pattern of sound words (2 Tim 1:13). Then, Satan will hold no sway over us. 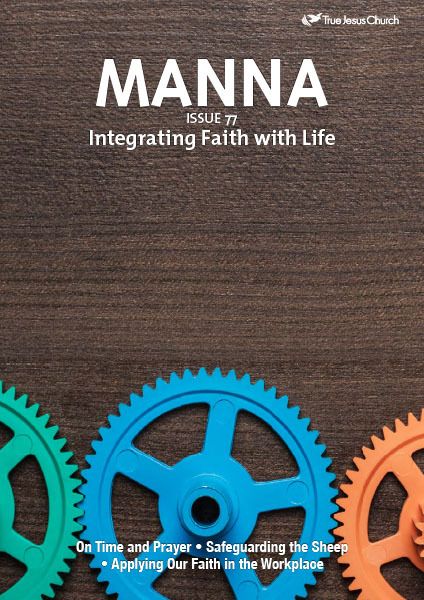