The Disciples on the Day of Pentecost

When the Day of Pentecost had fully come, they were all with one accord in one place. And suddenly there came a sound from heaven, as of a rushing mighty wind, and it filled the whole house where they were sitting. Then there appeared to them divided tongues, as of fire, and one sat upon each of them. And they were all filled with the Holy Spirit and began to speak with other tongues, as the Spirit gave them utterance. (Acts 2:1-4)

When the disciples received the Holy Spirit, they began to speak with tongues. This marvelous experience marked the first pouring out of the Holy Spirit. The experience was so powerful that it drew a multitude, and when these people came together, they were puzzled by the amazing phenomenon they witnessed. Peter stood up with the other apostles and explained to the crowd what had just happened: "This Jesus God has raised up, of which we are all witnesses. Therefore being exalted to the right hand of God, and having received from the promised Holy Spirit, He poured out this which you now see and hear" (Acts 2:32-33). Receiving the Holy Spirit is accompanied by such an obvious external sign that even an outside observer can see and hear it.

What is the speaking of tongues? It is speaking in a spiritual language that is not like any earthly language. Unless the tongue is interpreted, no one except God can understand it: "For he who speaks in a tongue does not speak to men but to God, for no one understand him; however, in the spirit he speaks mysteries" (1 Cor 14:2). The ability to speak in tongues comes from the Holy Spirit, not from imitating others.

Some Christians argue that speaking in tongues does not refer to an unintelligible utterance, but simply means praising God with ordinary language. They contend that if the disciples were speaking an unintelligible language, then the devout Jews would not have understood them.

What happened on the day of Pentecost was an extraordinary event. Even though the devout Jews heard the disciples, they were "confused," "amazed," and "perplexed." These Jews said, "we hear them speaking in our own tongues the wonderful works of God." Even though the disciples were Galileans, the people in the multitude heard them speaking in their own individual languages (Acts 2:6, 11-12, 17). This was indeed a great miracle.

But were the disciples actually speaking these different earthly languages? Luke, the author of Acts, noted that each person "heard" the disciples speak in his own language. In other words, they were hearing them in their own languages because God enabled them to understand the spiritual language. The disciples were not actually speaking human languages. If the approximately 120 disciples were indeed speaking these fifteen different languages all at once, the multitude would have heard nothing but noise, and it would have been impossible to discern one language from another.

Also, if the disciples were speaking other languages, why did the other observers mock them and say that they were drunk (Acts 2:13)? It would be strange, and even blasphemous, for these observers to accuse the disciples of being drunk if they were simply praising God in another human language--unless, of course, the disciples were uttering unintelligible tongues that did not even sound like an earthly language. These ungodly mockers could not understand the tongues of the disciples because God did not open their ears. Hence, the external sign that accompanied the pouring out of the Holy Spirit was the speaking of unknown, spiritual tongues.

The Believers in Samaria

Now when the apostles who were at Jerusalem heard that Samaria had received the word of God, they sent Peter and John to them, who, when they had come down, prayed for them that they might receive the Holy Spirit. For as yet He had fallen upon none of them. They had only been baptized in the name of the Lord Jesus. Then they laid hands on them, and they received the Holy Spirit. (Acts 8:14-17)

Later on in Acts, we read that God sent Peter to the house of Cornelius, a Gentile, to preach the gospel message to him. While Cornelius and his relatives and close friends were together listening to Peter's preaching, the Holy Spirit fell upon them all.

And those of the circumcision who believed were astonished, as many as came with Peter, because the gift of the Holy Spirit had been poured out on the Gentiles also. For they heard them speak with tongues and magnify God. Then Peter answered, "Can anyone forbid water that these should not be baptized who have received the Holy Spirit just as we have?" (Acts 10:45-47)

The Jewish brethren were astonished because they heard the Gentiles speak with tongues, and they were surprised that God had given the Holy Spirit even to the uncircumcised.

Another lesson we learn from this incident is that righteous conduct does not necessarily indicate that a person has received the Holy Spirit. Many professed Christians in the world live godly lives and dedicate themselves to helping the needy and serving the Lord. Are they not bearing the fruit of the Spirit? If they are, then how can we say that they have not received the Holy Spirit? There is little doubt that it is the love of Christ that motivates the sincere acts of zeal and self-sacrifice of these Christians. But we must also remember that there are many people in history who did not accept Christ but who lived upright lives and gave everything for the good of humanity. Can we conclude, then, that they also received the Holy Spirit?

Cornelius was "a devout man and one who feared God with all his household, who gave alms generously to the people, and prayed to God always" (Acts 10:2). But he did not receive the Holy Spirit until the Spirit came upon him during Peter's preaching. That is why Peter did not say, "Cornelius must have already received the Holy Spirit, because he is so devout. Who can forbid him from baptism?" Instead, it was only after they clearly saw and heard the Gentiles speak in tongues that they knew that the Holy Spirit had come upon them.

The Believers in Ephesus

And it happened, while Apollos was at Corinth, that Paul, having passed through the upper regions, came to Ephesus. And finding some disciples he said to them, "Did you receive the Holy Spirit when you believed?" So they said to him, "We have not so much as heard whether there is a Holy Spirit." And he said to them, "Into what then were you baptized?" So they said, "Into John's baptism." Then Paul said, "John indeed baptized with a baptism of repentance, saying to the people that they should believe on Him who would come after him, that is, on Christ Jesus." When they heard this, they were baptized in the name of the Lord Jesus. And when Paul had laid hands on them, the Holy Spirit came upon them, and they spoke with tongues and prophesied. Now the men were about twelve in all. (Acts 19:1-7)

One Spirit and One Gospel of Salvation

It is not possible to discover the complete truth of salvation through diligent study alone. Only by the revelation of the Holy Spirit can we know the true gospel.

But as it is written: Eye has not seen, nor ear heard, Nor have entered into the heart of man The things which God has prepared for those who love Him. But God has revealed them to us through His Spirit. For the Spirit searches all things, yes, the deep things of God. (1 Cor 2:9-10)

Without the revelation of God's Spirit, people will have different interpretations of God's word and the truth. Since the Reformation, Christianity has continued to divide into many denominations because of disagreement on basic doctrines. Whereas interpretation according to human will divides the church, the revelation of the one Spirit unites the church in one faith. Instead of relying on our own efforts, we need to pray for the Holy Spirit to reveal God's truth to us. Only then can we see and know the one way of salvation, which God has prepared for us. 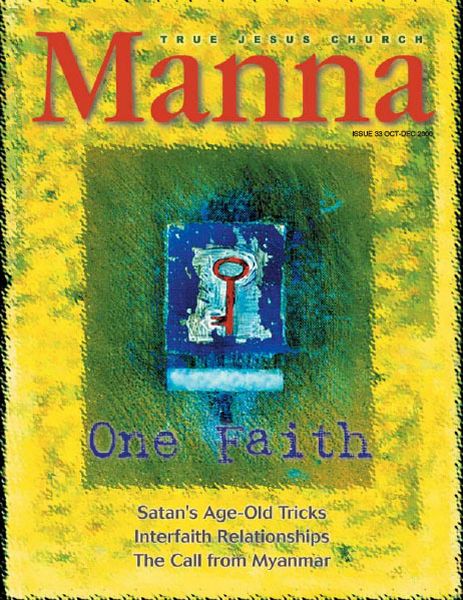