“What man of you,” says Jesus, “having a hundred sheep, if he loses one of them, does not leave the ninety-nine in the wilderness, and go after the one which is lost until he finds it?” (Lk 15: 3–4). As it turns out, many of us would not go on such a mission. Anything from fear to sheer complacency persuades us to stay with our ninety-nine, leaving that lost one to stray afar.

But God has no such weakness. Jesus came into this world to recover those lost souls. He often compared Himself to that shepherd, willing to risk all for one.

And Jesus said to him, “Today salvation has come to this house, because he also is a son of Abraham; for the Son of Man has come to seek and to save that which was lost.” (Lk 19:9– 10)

Again and again, Jesus assures us He cares, above all, for the lost and stray. But why? Why this obsession over the wanderers and those by the wayside, especially if they were the ones who chose to leave the well-trodden path? More pertinently, why should we also care?

THE PRECIOUS ONE PERCENT

Firstly, every sheep is precious in God’s eyes. In the parable of the lost sheep, that one stray represents one percent of the shepherd’s flock. What is puzzling, and what makes this parable so powerful, is the fact that the shepherd abandons the rational calculations we are always so eager to perform. The mathematics of divine love does not count the individual sheep as one of many dispensable and replaceable creatures. To God, each sheep equals one hundred percent—the subject of His full and undivided love and devotion.

Movies and fiction tell us to rejoice at the downfall of the bad guy. Not so with God. Every “fallen” man is one waiting to be picked up and placed onto the higher ground of fellowship with God. He does not delight in the perishing of any of His creatures; He wishes for all to come to Him, regardless of our pasts, repentant and resolute.

Secondly, there is no place too remote, no distance too great, that God cannot call back His flock. What was the shepherd thinking? Did he consider the vastness of the wilderness he had to search? Maybe wild predators had already got to that lamb. These factors did not stand in the way of his devotion to those under his charge.

All of us have the gift of imagination—there is little we are incapable of conceiving. The trickiest concept for us, it seems, is the goodness of salvation. We may know some troubled members who have not only lost their way, but have turned their backs, stepped proudly onto the wrong path, and strode off defiantly. It is admittedly hard in situations like this not to feel a certain helplessness, even a niggling feeling of resentment: Let them learn the hard way. They don’t deserve to be chased. This is not the way to think because this is not how God thinks. Created in His image, reborn in the blood of Christ, cherished by the Almighty, each and every one of us is worth all the trouble. Whenever it becomes difficult to see the goodness in people, see the goodness in God. He has made the first and hardest move to reconcile us to Him, and all who are redeemed should know better than anyone else the unmatched power of grace and love.

This leads us to the third point.

This is a faithful saying and worthy of all acceptance, that Christ Jesus came into the world to save sinners, of whom I am chief. However, for this reason I obtained mercy, that in me first Jesus Christ might show all longsuffering, as a pattern to those who are going to believe on Him for everlasting life. Now to the King eternal, immortal, invisible, to God who alone is wise, be honor and glory forever and ever. Amen. (1 Tim 1:15–17)

For those of us in the True Jesus Church, the elect of God, even if we have surrendered ourselves to sin, God will not quickly surrender us. Paul, the self-appointed “chief of sinners,” knew how deeply lost and unworthy he was. Knowing this does not give us license to despair or to see the equal ugliness in others. Rather, to know our baseness is the first step to knowing God’s glory and love. The chief of sinners knew he was in the best place to tell other sinners of a greater Chief who, though not one of them, loved them all to death and beyond, and desired to be with them.

We were all once lost, but now have been found. In turn, Jesus has called us to find others. But how shall we go about this search?

Firstly, we have to make the first move to reach out to our brothers and sisters, instead of waiting for them to come to us. Jesus has set the example. In Luke 15:1–2, we read of Jesus doing what all the esteemed religious leaders failed to do. Jesus had the respect and adoration of many, but a growing suspicion and an agenda were being set against Him. The worst thing He could do was to associate with the one group of people whom both the common folks and the lofty Pharisees were united against: sinners. But that is exactly what He chose to do. He went into the houses of tax collectors, broke bread with prostitutes, and reached out to lepers. Friend to the friendless and unloved, Jesus did more than receive these people when they came to Him. He went to those abandoned long ago by their community, stood with them, and shared their burdens when they were downcast. We must try to do the same. For the hand that steadied Peter on the waters, that performed great miracles and blessed thousands, was the same hand that reached out and comforted sinners.

Start with the little things. Check in with our brothers and sisters regularly through texts and phone calls, organize outings and arrange family visitations—these are things we can easily do to remind others of the ever-present love of God in their lives. Small but consistent actions, such as sharing our favorite verses on social media and leaving notes of encouragement, can go a long way. Even just telling people that we are keeping them in our prayers is a very meaningful gesture.

Secondly, we must remember to be patient and never lose hope. Luke 15:11–32 tells the story of the prodigal son, a lost sheep if ever there was one. Not only was this profligate wanderer physically far from his father, his heart was also removed from his father’s love and his home. A whole world separated son from father. But not in the father’s mind. This father patiently kept his eyes on the horizon, waiting each day for the slightest hint of his son’s shadow, ready to embrace and call that disgraced delinquent his son once more.

The father waited for the time he knew would come. We too must wait for God’s time, and know, by faith, that it shall come. It may take a long time for things to change. But when it does, when minds and hearts change, they change quickly. Our words, pleading and pitiful, may never seem to be enough, but through God all things are possible. For God can and does use sufferings, trials and all manner of dead-end situations to bring about the greatest miracles and spiritual resurrections. All that is asked of us is that we remain as the father—waiting, watchful, praying always with all our faith—so that we can endure until God’s time comes.

Thirdly, we must remember to not be judgmental towards those who are weak. Jesus, betrayed and abandoned by those who promised Him their devotion, resurrected and glorified, stood on the shore and approached these fallen men, asking “Children, do you have any food?”

That was it. Jesus did not interrogate them on their actions, nor did He seek to sear guilt and shame into their hearts. Without a shred of spite, He called out to His children, and welcomed them back with a miracle of fish. The simplicity of this love is what makes it the most beautiful and divine. Just as the father greeted his prodigal son with a feast, so Jesus fed His children, who had been equally lost and confused. This was a double miracle: the supernatural display of extreme power and extreme love. And so, the children return home.

Shall the prey be taken from the mighty,

Or the captives of the righteous be delivered?

But thus says the LORD:

“Even the captives of the mighty shall be taken away,

And the prey of the terrible be delivered;

For I will contend with him who contends with you,

People lose their way sometimes. It happens to the best of us. The beauty of being a Christian, of knowing the God we know, is that while we may have shameful histories and painful presents, we also have an everlasting future built on blood, with love and grace, by Jesus Christ. Let us continue to pray for the deliverance of those who are still lost, by the power of our Almighty God. 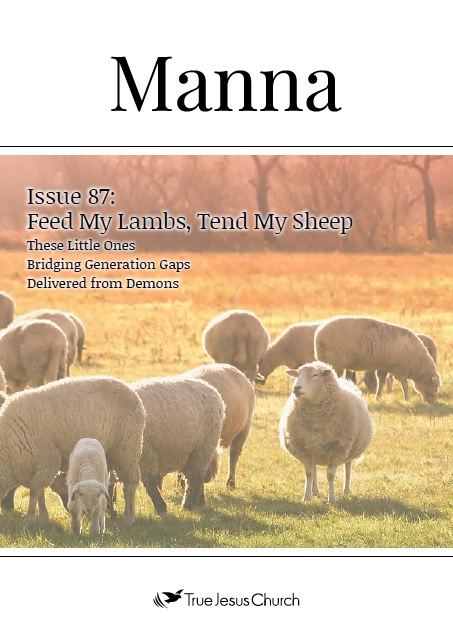